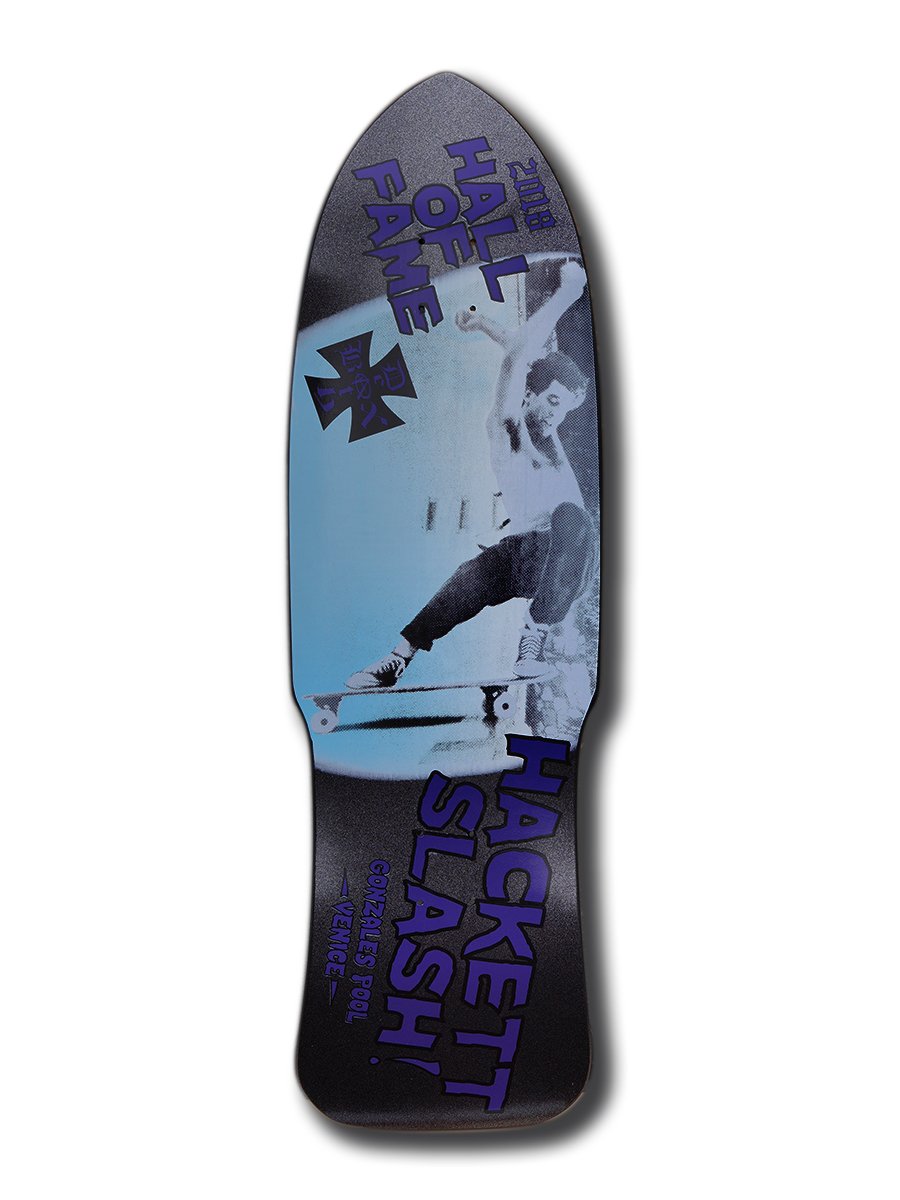 All-around surf-skater David Hackett was born in 1960, grew up in Malibu, California and started skateboarding on a steel-wheeled Roller Derby board at the age of 5. He won his first bank riding contest at 14 at Malibu Park JR. High school, and learned to bomb the hills around his Malibu home from Woody Woodward and Torger Johnson.

He is a two time World Champion, winning his first World Title at 15 for Jr. Men’s Slalom at the Hang Ten World contest, then Immediately started riding schools & pools with the infamous Z-Boys, Jay Adams, Wentzle Ruml and Steven Picciolo. He quickly became a major force and early pioneer of extreme skateboard stunts by jumping a rocket skateboard over three cars end-to-end and debuting some of the first Bionic Airs out of Reseda’s Skatercross 2nd Bowl.

He won the 1978 US Open Pool and Bowl event at Kona Skatepark and the 1979 Pool & Halfpipe event at Oasis Skatepark. He is a 100% surf-skater for life. Focusing on riding his skateboard with speed, style and ripping on all types of terrain. For over 40 years now, he has appeared on the cover of over 10 skateboard magazines, in movies and books, plus racked up over twenty 1st place finishes at events in freestyle, slalom, bank riding, pools and halfpipes.

Dave “Hackman” Hackett has ripped, torn and slashed his way into skateboarding’s history with his patented move- The Hackett Slash! At the age of 46, he solidified his legendary status by becoming the “Oldest” professional skateboarder to conquer the Infamous “Loop of Death”.

In 2018, he was honored with an induction into the Skateboarding Hall of Fame and to commemorate the occasion, Deathbox® Skateboards produced 100 custom handmade boards at Watson Lam, featuring one of many famous photos of the Hackett Slash. This one was shot at the Gonzales pool in Venice in the early 80’s by Ray Flores.

This special edition board is made on the Supreme Concave at Watson Lam in San Diego, with hand silk screened graphics. The limited laser numbered series on this Thick Bitch lamination construction makes it a perfect Park & Pool deck or a great collector and wall hanger.

Each board comes with a full-size 24” X 36” poster of Hackett doing the Slash in the Delores pool, shot by Glen E. Friedman, which is one of the most iconic photographs of the early 70’s and 80’s pool skating ever. This photo has never been available on a poster before and has only been published in a magazine one time, yet has inspired countless artworks and tattoos since. A truly classic photograph from legendary ripper David Hackett.